UCC continues to ‘face the evil’ in response to killings of Floyd, Arbery and others


“Strengthen our commitment to ending lethal white supremacy and the racism it needs to thrive.” That prayer, read as a closing refrain, summed up many of the sentiments expressed during an online vigil organized by United Church of Christ and other faith leaders in Minnesota on Thursday, May 28.

It was the latest in a series of UCC responses to the May 25 death of George Floyd at the hands of Minneapolis police officers.

Starting Thursday afternoon, the normally colorful home page of the denomination’s national website bore a special black background and a statement from its national officers under a white headline, “Lynching Justice in America” (right). “A man was lynched by police in Minneapolis this week,” it began – and it went on to describe other similar recent acts of white-on-Black violence.

Systems that ‘oppress and kill‘

“Somehow we must garner the strength to call out this evil, … to face this head on and call it by name,” said the statement by the Rev. John Dorhauer, general minister and president, and the Revs. Traci Blackmon and Karen Georgia Thompson, associate general ministers. “Only when we choose to face the evil can we cast it from our collective being. This is the work of the entire church.”

The UCC’s statewide body, the Minnesota Conference, had also posted a statement on its website and via social media Wednesday. “We must unequivocally affirm that George Floyd’s life mattered,” wrote the Rev. Shari Prestemon, Conference minister. “His Black life mattered. He was a precious Child of God. … We must lament our own complicity in systems that privilege many of us while those same systems from which we benefit oppress and kill communities of color. … In the name of Jesus Christ, in whose name we worship, we must say ‘no more.’ We must call for change and demand justice. We must be the change we say we want.”

Floyd’s death will also be addressed in a UCC-sponsored online panel discussion, “The Cross and the Lynching Tree: A Requiem for Ahmaud Arbery,” at 6 p.m. EDT Sunday, May 31. Already planned before this week’s killing in Minneapolis, the webinar takes its title from a dramatic video-sermon by the Rev. Otis Moss III of Chicago’s Trinity United Church of Christ. In it, Moss, who will be one of Sunday’s panelists, connects the February murder of Arbery in Brunswick, Ga. – and others like it – to America’s long history of Jim Crow racism. The webinar will address how Christians “can be actively involved in dismantling racism.” The public can register for the conversation here.

Organizers of Thursday’s online vigil included the Rev. Rachael Keefe, pastor of Living Table UCC, and the Rev. Oby Ballinger, pastor of Edina Morningside Community Church, UCC. Held via Facebook Live, it was hosted by UCC’s Minnesota Conference with support from Jewish, Muslim, Unitarian and Christian congregations and groups from throughout the area. It was billed as an opportunity to “ament the death of another unarmed Black man, confront the idolatry of white supremacy that underlies it, offer response from our faith and commit to ongoing action for safe, multiracial public life in Minnesota.” 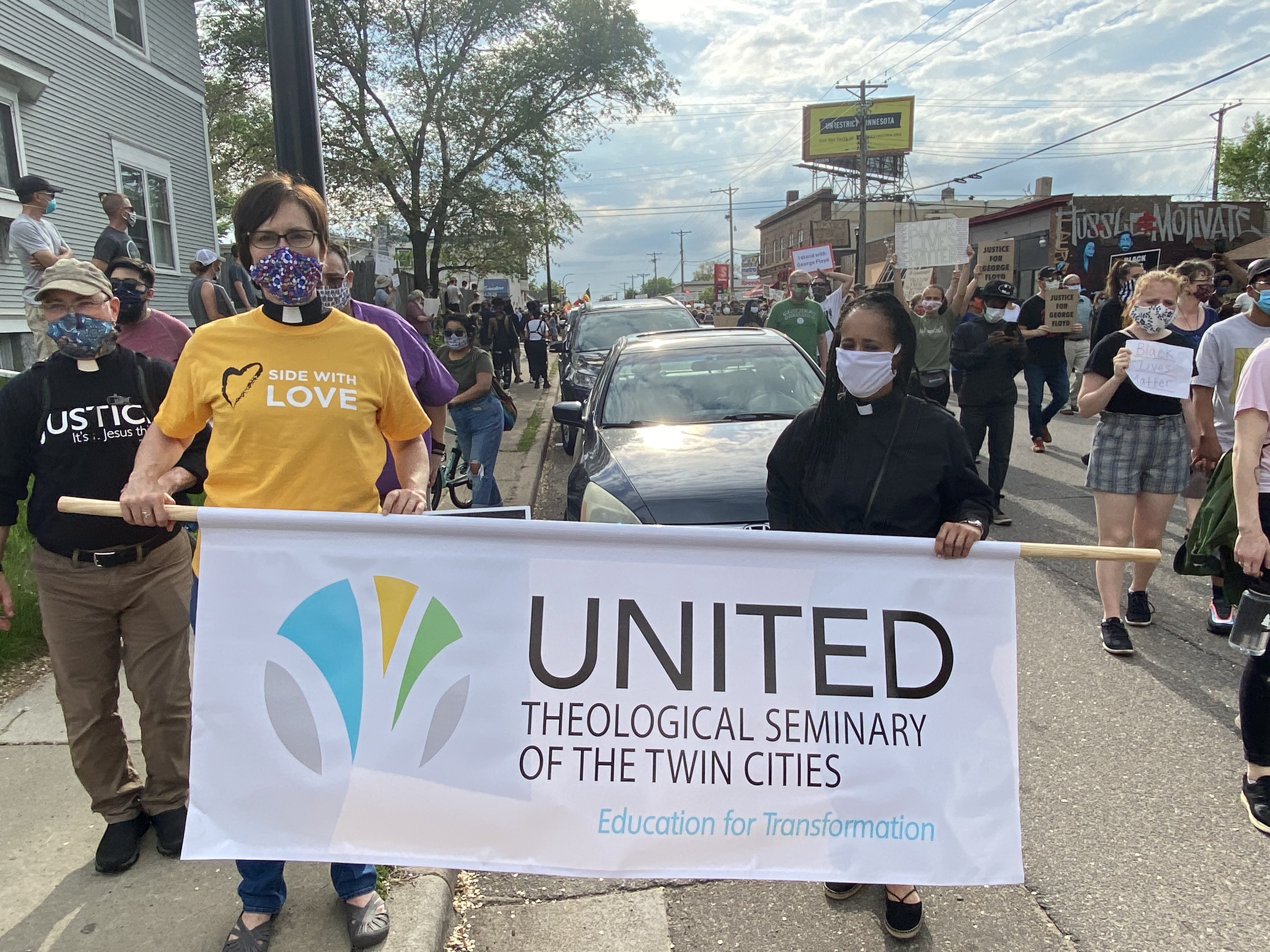 “Mostly I want to create a safe space for people to mourn, to lament, to share righteous rage,” Keefe said during preparations for the vigil. “In addition, I pray that the white folx who are present will recognize that our silence, our inaction, condones and perpetuates lethal racism in this country. Now is the time to make an active choice to challenge and dismantle systems built on and fueled by racism. We must demand change and not stop until all human beings are treated with the respect due every one of God’s beloved children.”

And that is how it went. According to the Conference’s analytics, more than 8,000 viewers tuned in during the stream from urban and rural Minnesota as well as from states as distant as Connecticut, Colorado and Oregon – and by Friday an additional 6,000 had viewed it. They heard sung and spoken offerings of scripture, poetry and prayer in English, Hebrew and Arabic.

And they heard reflections by Blackmon, Prestemon, the Rev. Christian Briones of Mayflower UCC and the Rev. DeWayne Davis of All God’s Children Metropolitan Community Church. All touched on the need to acknowledge the rage triggered by Floyd’s death – visible in property damage and fires touched off Wednesday and Thursday amid otherwise peaceful protests, to which police responded to with tear gas. But all of the speakers also touched on the need not to lose hope, not to become paralyzed – and to commit to the long, hard work of developing strategies and actions to end violence against Black people, even if those strategies may not be visible yet.

“Action begins with seeing,” Blackmon said, interpreting a biblical story in which Jesus interrupts “business as usual” in a synagogue service and stoops down to look in the eye of a woman bent over with an affliction. “Action begins with listening. … It begins with proximity to pain. And this proximity may cause us to have to distort ourselves and be uncomfortable sometimes.”

‘Change the culture that led to this incident‘

The first UCC reactions in Minneapolis had come on Tuesday, May 26, the day after the killing. A protest at the site of Floyd’s death drew thousands of people, including a group of faculty, staff, alumni and students from UCC-related United Theological Seminary of the Twin Cities, marching behind their school’s banner (pictured above, right). “I chose to go to the protest because as an embodied people, we must put our bodies in places that cry out for justice,” said the Rev. Justin Sabia-Tanis, assistant professor of Christian ethics and social transformation. 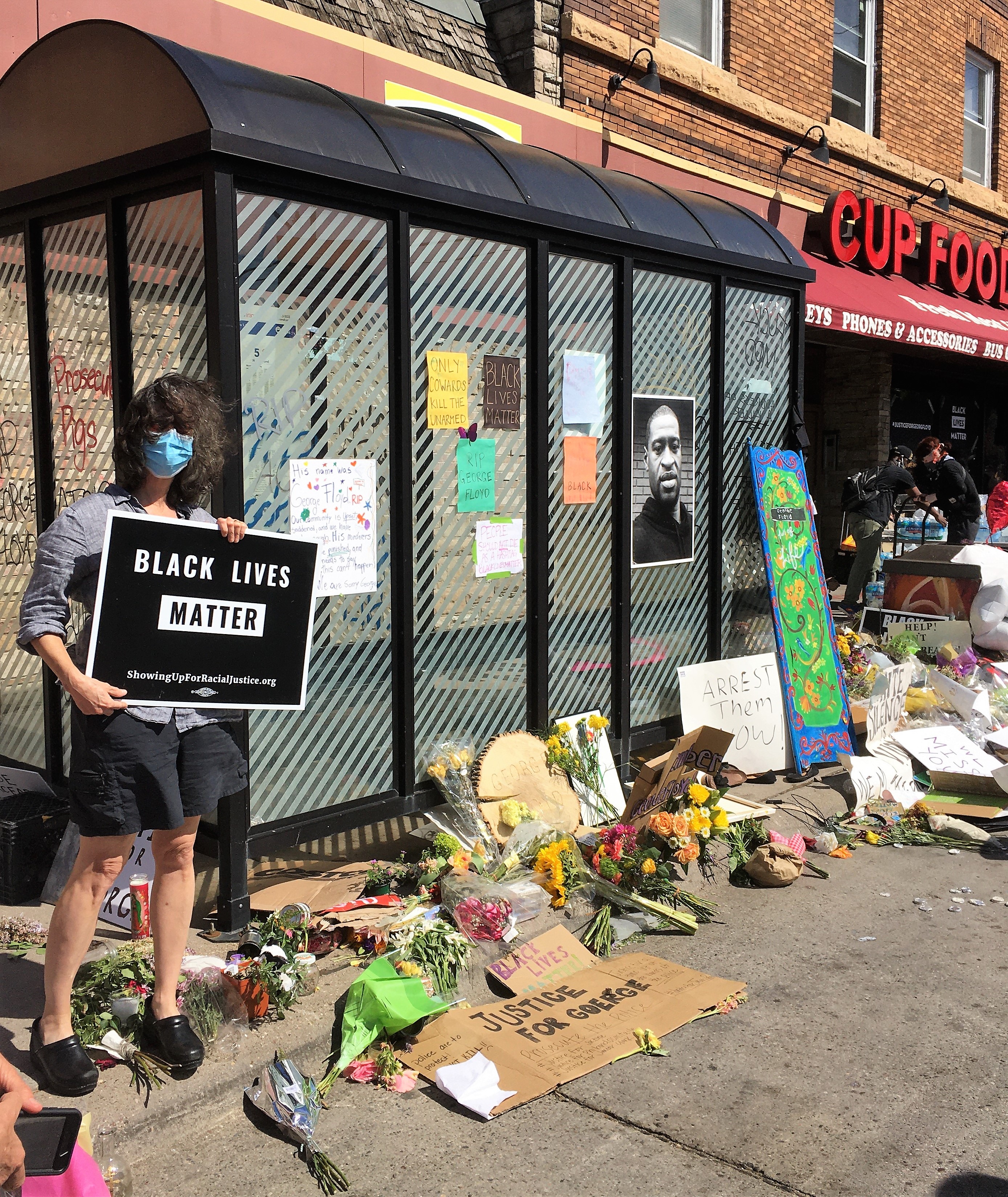 “As a white person, I went to stand in solidarity with those who are most impacted by this devastating and ongoing situation of violence, and to name a white supremist culture as responsible for this death,” he said. “I was horrified by the look of indifference on the white officer’s face as he slowly suffocated a person begging for air and life. As [people] of faith, we witness to the fact that the Beloved Community has lost another member, has suffered from an act of violence.

“The mood was tense at the gathering. The police that we saw were, I felt, adding to the stress and fear of the crowds. We have to work now on taking all the steps we can to hold the police accountable but also to change the culture that led to this incident.”

On Thursday, the Rev. Sarah Campbell (right) joined a peaceful demonstration at the Chicago Avenue site of Floyd’s killing, just 2½ miles from Mayflower UCC, where she serves as team lead minister. She left flowers there. In a daily email to the congregation, she encouraged “inner work that refines our minds and hearts” but also “the practices of faith-based community organizing – the outer work of powerful, strategic, effective organizing.” She recommended action through local partners such as Isaiah and Beacon.

“We all need to stay committed for the long haul,” she said.