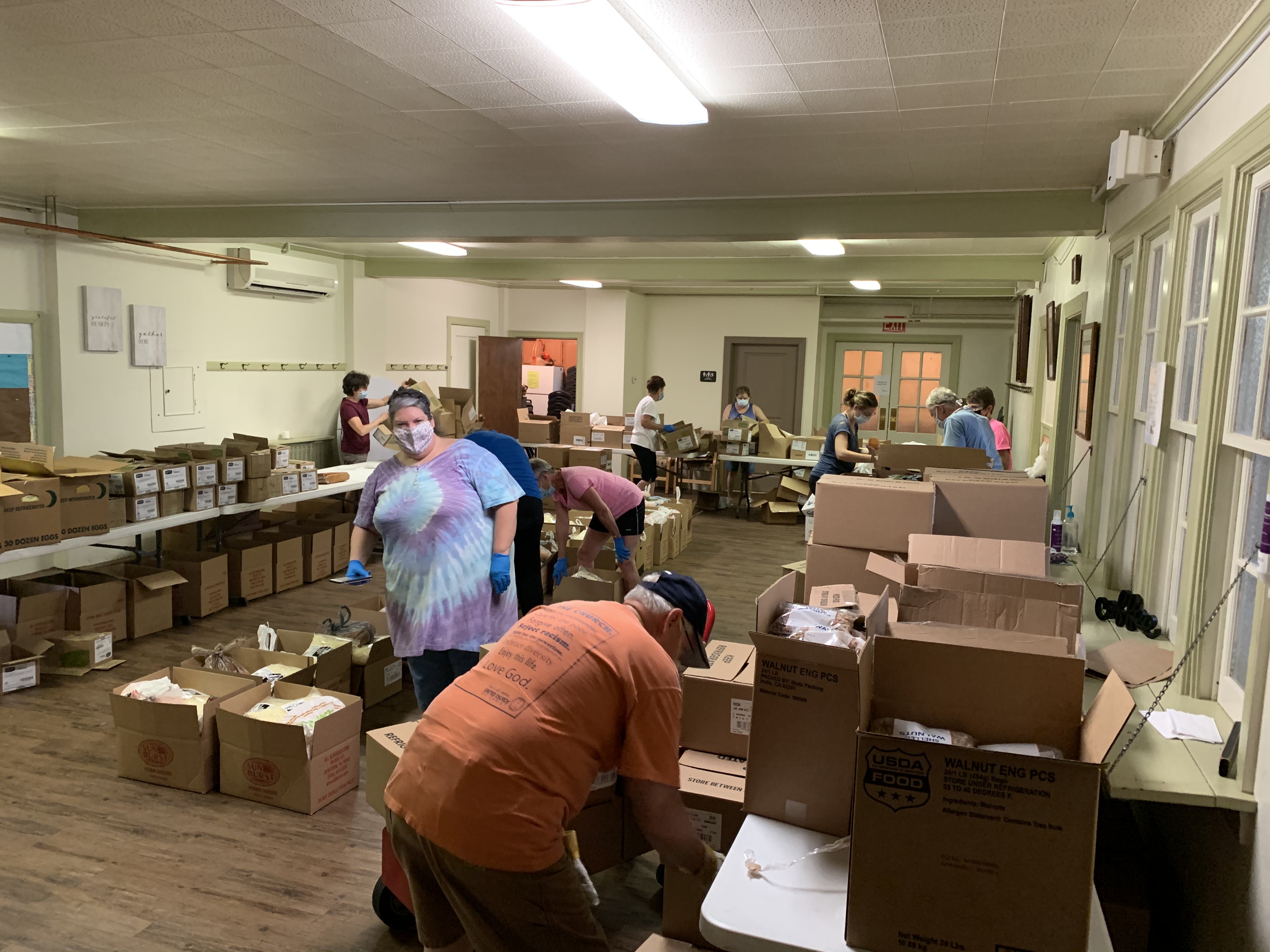 United Church of Christ congregations from coast to coast are finding ways to fill the gaps the coronavirus pandemic is creating in their communities. Many of those ministries revolve around food.

Two small faith communities – a city church in a waterfront neighborhood in Seattle and a country church in West Milton, Pa. – both established feeding programs because of COVID-19. One collects staples for the local food bank. The other functions as an area distribution center.

‘Our most vulnerable neighbors’

“Like many churches, Alki UCC found herself in March 2020 looking at a completely new landscape. As a small but thriving congregation, the rapid shift away from in-person gatherings caught us by surprise,” said the Rev. Kelly Wadsworth, pastor of the Seattle church. “While there were a hundred things we could no longer do, the church’s Outreach Team wisely focused their gaze on what could be done.”

So on Easter Sunday, while grieving the absence of in-person Easter festivities, two church volunteers donned Easter bunny ears, along with masks and gloves, to kick off the first COVID-19 food drive.

“We heard that the local food banks were being wiped out by folks losing their jobs and wanted to do something immediately that would be of service to our neighbors (by collecting for them) and offering service to those in need,” said Alki UCC Outreach/Social Justice team leader, Cinda Stenger, who has been managing the drives. “We’re connecting two communities.”

“Cinda immediately realized how critical the need would be for our most vulnerable neighbors that she instituted the every-other-week food drives pretty soon after Washington’s Stay at Home directives,” said Larisa Wanserski, Alki office manager. The current effort, with the next collection planned for Sunday, July 11, benefits the White Center Food Bank. 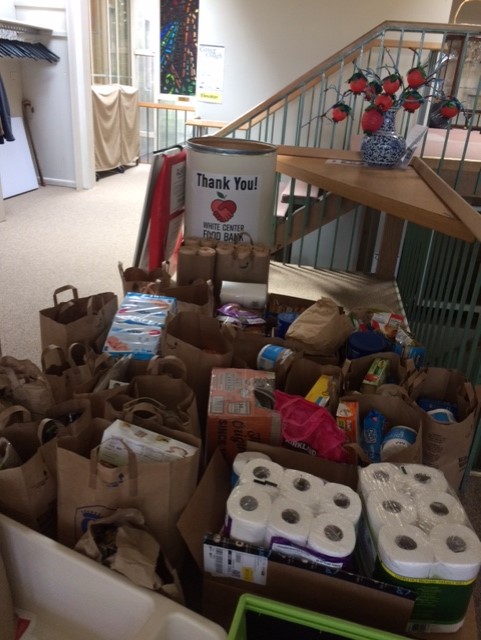 Donations are accepted two Sundays a month outside the church building from 10 a.m. to 4 p.m. Top requested items include cans of meat, soup, fruit, rice, noodles and peanut butter. Toilet paper, diapers, formula and baby wipes are in demand, along with cleaning supplies and hand sanitizer.

“We have many people who are out walking and biking because of the beach, so our hope was that they would see our signs and drop boxes, go home and gather stuff up, then come back,” Stenger said. “Sure enough, many have done just that. So we took advantage of our location to make ourselves more known and be of service to our neighbors.”

And as Stenger noted, the church also responds to requests. After a former member, an officer in the county drug court, pointed out difficulties in collecting items for participants entering its highly successful rehab program, Alki UCC added to the donation list.

“We added the clothing drive to the food drive and the clothing just poured in,” Stenger said. “We were able to provide for his program, and send the local clothing bank a lot of clothes, mainly much–needed men’s and kids’. People are home now and many are cleaning out closets and downsizing, and they have nowhere to go with their donations as all the regular outlets are closed. So again, we were able to connect two communities in service to both.”

‘I was frankly a little startled’ 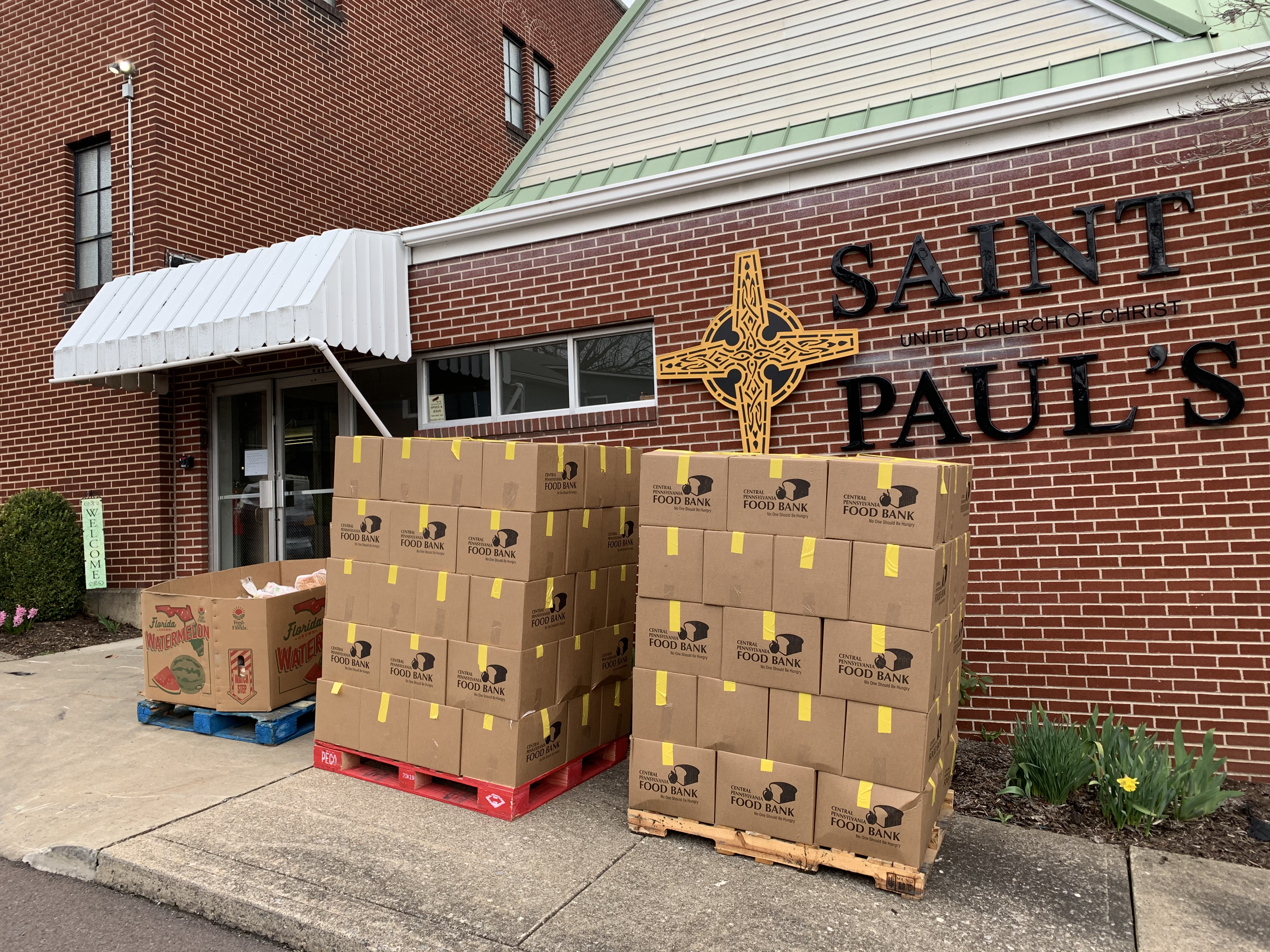 In West Milton, Penn., Saint Paul’s United Church of Christ has connected with its community through “Fresh Express Food Distribution.” The program, which actually began at a partner church in 2018, moved to the UCC congregation in March after the first church closed. Typically 50 to 60 families collected food once a month. Then came the pandemic.

“We served our regular distribution — the first one at our church — on March 12,” said the Rev. the Rev. Timothy Hogan-Palazzo, church pastor, noting that St. Paul’s suspended in-person worship on March 15. “On March 18 we got a letter (from the Central Pennsylvania Food Bank) asking if we could help further. A small leadership team came together and began making calls to volunteers, some made masks, some donated gloves and others just came. Every participant we had served in the past six months was sent a letter and on Thursday, March 26, we served 115 families for our first pandemic era food distribution.”

Beau Hoffman, a neighbor and local attorney whose house is in view of the church, at first was surprised to see so much activity.

“My ‘COVID-19 makeshift home office’ has a window that looks up the street directly at St. Paul’s. The first time I realized what was going on, I was frankly a little startled by the number of cars and people I saw at St. Paul’s. My initial thought was, ‘Pastor Tim shouldn’t be having such a large gathering!’ Then I realized the cars were not showing up for a gathering, but they were stopping so that workers (who were socially distanced and wearing masks and gloves) could fill their cars with food!”

‘Numbers we serve continue to soar’ 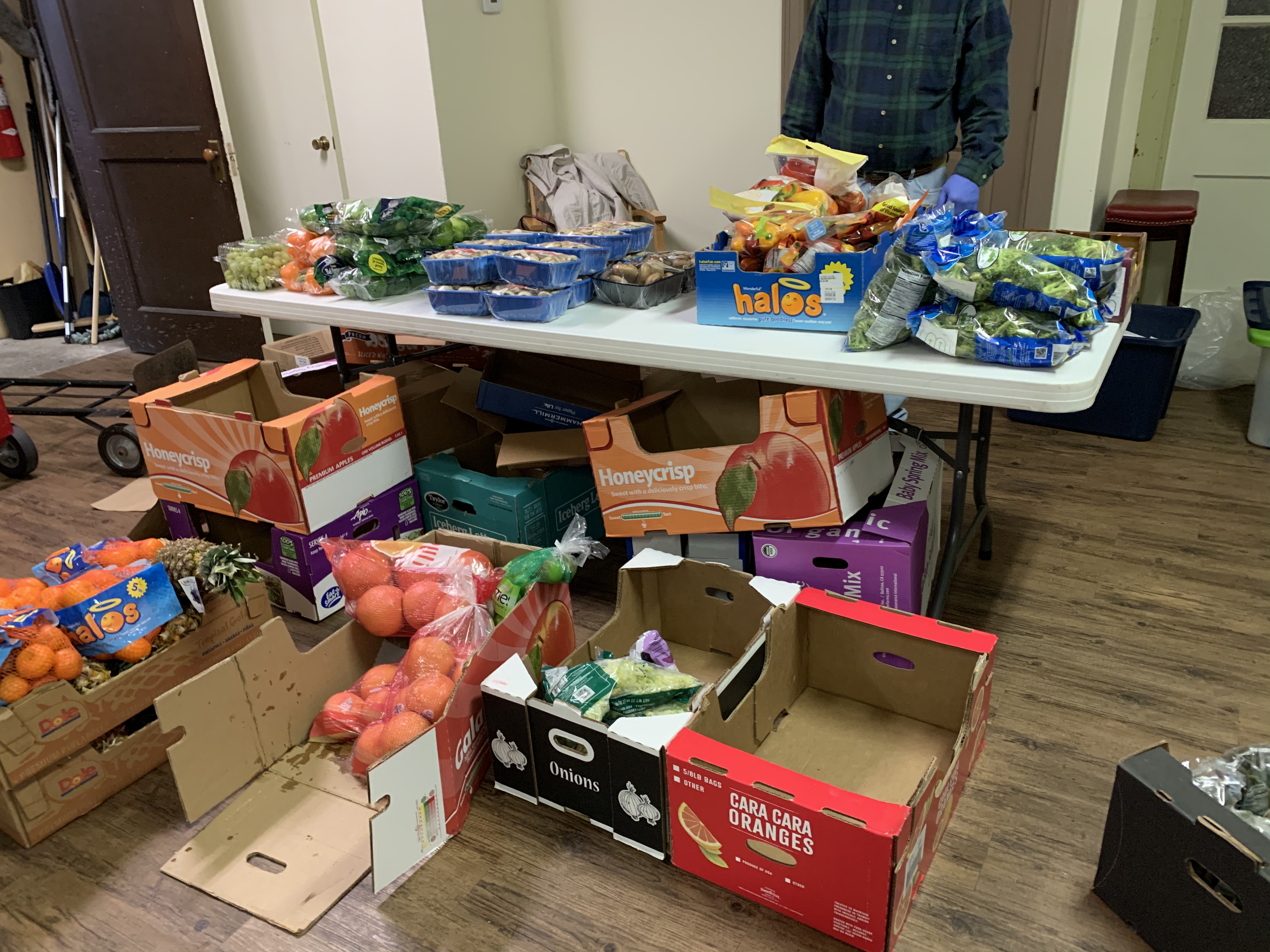 Neighbors receive a mix of fresh produce, full meal packages, frozen proteins and shelf-stable items. Hogan-Palazzo said the recipients range from those who have been laid off to those who just cannot make ends meet. Most of them live within 10 miles of the church.

“As I watched I was immediately overwhelmed with joy,” Hoffman said. “My wife and I were both laid off for a month at the beginning of the pandemic. Although we both did not struggle financially, I know many who were hit hard by the economic impact of the pandemic. Seeing a local church serve the community—a community I knew was confused, struggling, and hurting—brought tears to my eyes and warmed my heart.”

The next distribution is Thursday, July 9. Hogan-Palazzo said the response has been “incredible.”

“Our church volunteers have stepped up beyond all belief, community members have called to ask how they can help, a neighboring church has been collecting grocery gift cards,” he said. “One member even got in touch with an infant formula company and we now get a donation of three cases of baby formula a month.” St. Paul’s confirmation class is helping too. “Altogether, we have more than 30 percent of the church worshipping community volunteering in some way or another since this began.”

Beth Vincent is one of those volunteers. She and her sister, Amy Rearick, work as inside organizers oversee the unpacking and repacking process. They haven’t let the pandemic slow them down.

“The virus didn’t stop significant life events. We continue to follow guidelines from the CDC and state government,” Vincent said. “Fresh Express has put the little church on the hill in the spotlight. The numbers we serve continue to soar as word spreads.”

‘Relationships have been formed’

“I have been singing St. Paul’s praises for this food distribution ministry,” Hoffman said. “It truly shows, in my opinion, what a healthy, robust, kingdom mindset looks like. Should we be paralyzed by fear from the pandemic? No, our trust is in God. But should ignore we the reality and severity of the pandemic? Of course not—we express our genuine faith by serving others.”

“This is truly a neighbors–helping–neighbors adventure,” Hogan-Palazzo said. “The other thing that has happened during this time is that relationships have been formed, with both our guests and our volunteers. Guests reach out to just check in on the church and offer their help to us and our volunteers have formed a close bond with those we are serving, asking about family members, taking prayer requests, joking and laughing and sharing in some great memory making moments.”

That’s also happening in Seattle. “Our church had been partnering with the local food bank for years but it was always a church-food bank partnership and didn’t specifically include the neighborhood,” Wadsworth said. “These new realities have seen much stronger and exciting partnership with immediate neighbors and the surrounding community.”