Embracing the ‘apocalyptic,’ seminaries adapt to ministry, theology in a pandemic


Watching each other practice their sermons via the internet, seminary students are learning new things about their posture and physical gestures – and what’s hanging on the wall behind them. 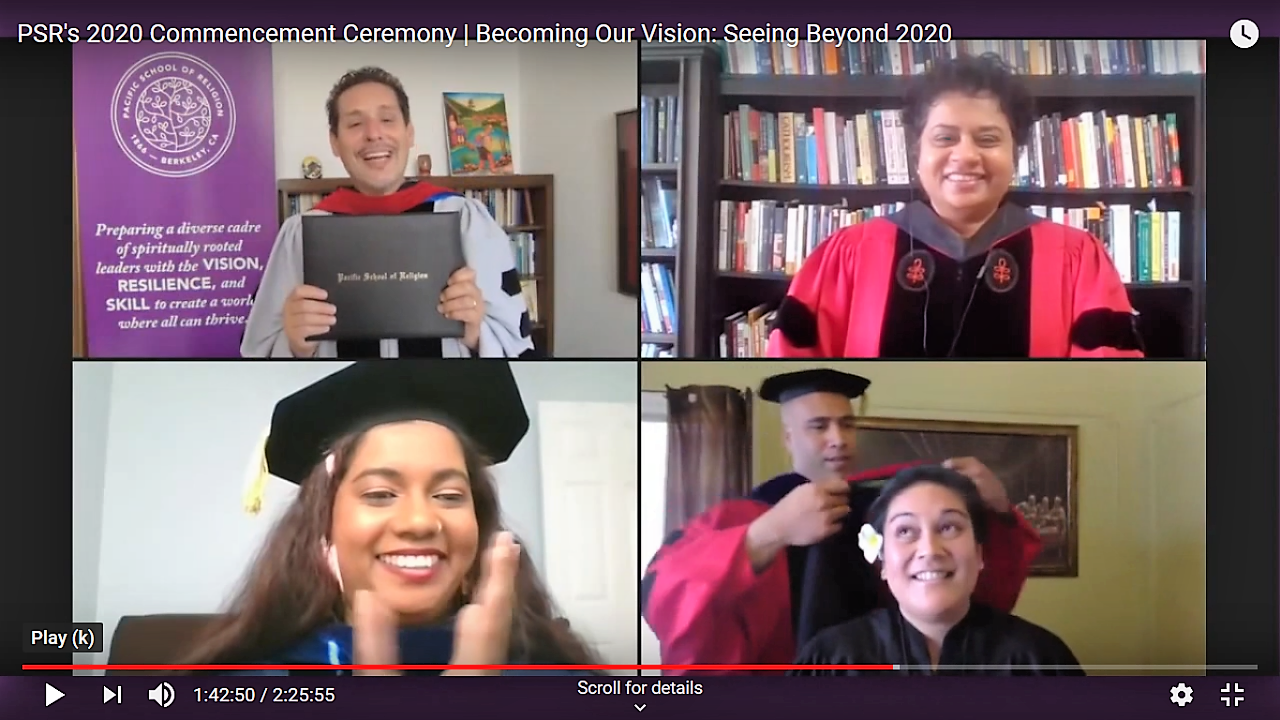 A course in biblical studies is focusing on what happens in scripture when people are displaced from spaces of worship and community.

Student ministers are visiting parishioners and patients online – and being reminded of old-fashioned pastoral care methods, too.

These are just few of the new things that are happening as United Church of Christ-related seminaries adapt to the era of the coronavirus. Having moved online last spring with all or most of their classes, they are continuing to be creative with fall classes set to begin soon – also almost entirely online.

Many seminary administrators are not viewing it as a mere inconvenience, nor even just a moment to teach different ministry skills. Rather, they see it as a time for needed theological reflection about the future of the church.

‘Attentive to what is being revealed’

“The framework we have been using a lot is attentiveness to the word ‘apocalyptic,’” said President David Vásquez-Levy of Pacific School of Religion, Berkeley, Calif. Before the pandemic, he was already hearing that word as he took part in programs of the California-based Institute for the Future, which gathers leaders from many industries and social sectors to do 10-year forecasts on a variety of topics. “Most people were using ‘apocalyptic’ in terms of the end of things,” he said. “I engaged people in thinking about how it is about revelation – marking the end of certain things, yes. But, more importantly, being attentive to what is being revealed.”

Inequalities are one thing COVID-19 and this summer’s “massive social movement all over the world” have revealed, Vásquez-Levy said. These include inequalities related to race, health care, education and more – matters that the church, seminaries and all of society must attend to, he said.

And things are being revealed about “what it means to be church,” Vásquez-Levy said. An example can be seen in PSR’s chapel services, which, since moving online last spring, have drawn more participants than they were in person – something many congregations have noticed, too. Could this be a clue to what churches should invest in in the future, especially in mainline Christian denominations, where, as Vásquez-Levy noted, 50 percent of church properties are more than 50 years old? “It’s really amazing to see that God is up to,” he said.

Being online ‘has virtues of its own’ 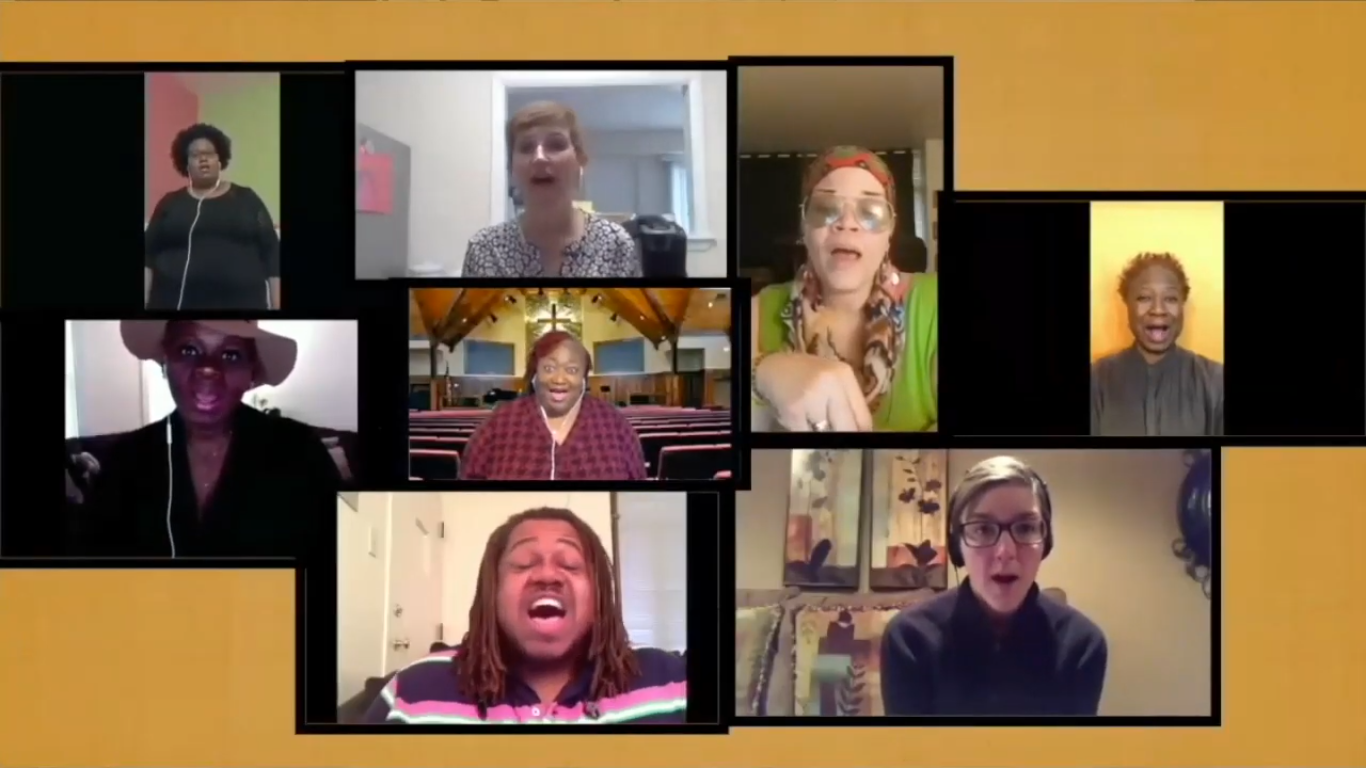 When Lancaster (Pa.) Theological Seminary moved online last spring, a student with video skills and equipment got classmates to lend their voices – from their homes – to virtual choral pieces she compiled for chapel services. “They were compelling, and they showed the students the possibilities of virtual worship,” said Assistant Professor Catherine Williams, who teaches preaching and worship and directs the chapel.

“I don’t think it can substitute or compensate for worship in person, but it has virtues of its own that we discovered,” Williams said. “In preaching class, people had to be more mindful and attentive to the body, because you can see the body in much closer range in Zoom than you can in the congregation. This brought an awareness of the possibilities of the body. Gesture and posture can communicate just as eloquently as words. It’s a different kind of learning that they value.

“One of the things that they quickly came to pay attention to was where they were, and the surroundings. When the camera is training on you and there is something behind you, that is also communicating.” By the end of the semester, she said, students were giving each other feedback on which backgrounds, which ways of standing and which camera angles made for the most effective delivery.

In the classroom, the chat feature enables people to speak up who would not ordinarily do so,” Williams said. Also, she said, “I have found that, particularly with music, people can be moved in ways they would not expect. It gives the viewers an opportunity to pay attention to the words in ways they may not have paid attention to before. We have had moments where people have said the spirit is definitely moving in that song or in that prayer – thank you so much for that.”

As for off-campus placements, adjustments are still in progress, said Lancaster Dean Vanessa Lovelace, who is also vice president of academic affairs. Some hospitals are still figuring out whether clinical pastoral education students will be able to learn in person or online. “Maybe there is a way for patients to sign up for prayer requests, and a device like an IPad could be brought in and prayers offered that way,” Lovelace said. “We do not have to stop it because they cannot be present physically. There are there still ways to be present.”

Field education, in which students are placed in congregations, has been uninterrupted, Lovelace said. “It’s really taught our students the opportunities that are possible – things that they could do online.” Not only that, being unable to see parishioners in person has taught “things that people may have forgotten that are still useful,” she said. “There is still such a thing as calling people or sending snail mail to let them know they’re still thought about.”

“To take pressure off of students, we have suspended our Border-Crossing Immersion and Clinical Pastoral Education requirements, as we’re determined not to require students that which they can’t access,” said Andover Newton Dean Sarah Drummond.

“We continue to urge students to pursue these experience-based educational options, and in fact we will not grant students an Andover Newton diploma without a plan for CPE. We haven’t modified our expectations that students have one year of supervised ministry in a church. We’re seeing encouraging news about churches that are making supervised ministry work as part of their online adaptations, and hospitals that are doing the same for CPE.”

Andover Newton will offer limited in-person classes this fall for students who choose them, including an Intentional Leadership course taught by Drummond. Classrooms will be configured so students are at individual tables, six feet apart from each other, she said.

“The configuration will keep the number (in any classroom) under 20, but I’ve indicated I can open up another section if we have greater interest,” Drummond said. “Some students are hungry for in-person contact, even with masks and physical distancing. Others aren’t even relocating back to New Haven this fall and will take all their courses online. All who are planning to teach in-person will stand ready to pivot if the public health situation necessitates change.”

Eden Theological Seminary, Webster Groves, Mo., has suspended in-person classes for the fall semester at least. It is offering what Dean of Students Sonja Williams describes as a mix of “synchronous and asynchronous delivery.” That means some classes are held live, via Zoom, with a professor and other students, and other lectures and presentations are recorded and made available via an online learning system.

“Students really want to learn on campus, nestled in classrooms on a beautiful campus, with faculty and classmates they can hug and jostle with occasionally,” Williams said. But having finished the spring semester in a pandemic, “students better understand how their distance from one another is providing safety for one another, and creating opportunities to restructure their lives, creating intentional communities of care.”

She said Eden, online, will continue to “integrate life, learning and critique for the sake of the church and for the common good of all. And, if the truth be told, a few students really like saving gas money due to less driving.”

All the seminaries are reckoning with the pandemic’s effects on enrollment.

At Eden, Williams said she expects enrollment “to be down from prior years.” “In addition, the economic uncertainty and job loss has either helped in some instances or hindered in others when encouraging students to answer their call to ministry,” she said. “In response, Eden has reduced the cost of tuition by 45 percent for the entire 2020-21 Academic Year, to encourage students to respond, for such a time as this.”

“Some of our students have deferred until 2021, because of uncertainty in their lives,” said Lovelace at Lancaster. “We didn’t have anyone say I’m not coming because you’re going to be online.” Because of immigration uncertainties, Lancaster is not accepting any new international students for the coming year.

At PSR, 30 percent of students typically live on campus in their own apartments. “A few” incoming students have elected not to move to campus and to take courses remotely, Vásquez-Levy said.  “We have one dorm that has shared spaces, so that is the one we’ve been much more attentive to,” he said. “We’ve initiated greater protocol of cleaning. And we have put together protocols in the event someone were to contract COVID-19,” including spaces where people can isolate.

‘The church needs to think about it’

Leaders at all the seminaries spoke of being proactive about the pandemic.

At Andover Newton, Drummond gathered a leadership team of faculty, trustees, students and staff in July for a “VisionFest,” resulting in the theme “Embracing Transformation” for the coming year. Its four priorities, she said, are “embracing the prophetic moment, leading with transparency, education for social justice leadership, and ‘varsity’ hospitality, especially for entering students.”

She said she hopes the resulting programs will help students “learn something about what it takes to be a ministerial leader in an era where ‘unprecedented’ is the only adjective on which we agree.”

Conferring degrees live and online at its spring commencement, PSR incorporated prerecorded outdoor images of graduating students – including aerial images of campus, captured by a drone-mounted camera, and a socially distanced, four-directions ritual led by students (click on the image at right to see the full commencement). “Thinking about worship as we go into fall semester, we are considering elements that can happen outside even though most students will participate remotely,” Vásquez-Levy said.

But he, like his colleagues on other campuses, were also frank about the difficult work ahead

For the church and all its institutions, “there is a need which we are seeing to be very honest, very clear-eyed about the challenges that will come with this time, with uncertainty – to trust the spirit in this work,” Vásquez-Levy said. One thing that needs thought, he said, is the role and future of seminaries.

“It takes a concerted social will to think about education as an investment,” he said. “The church needs to think about it for itself. What is going to be our denominational investment for the future of faith communities?”