Responding to Monday’s violent death of George Floyd at the hands of Minneapolis police, local congregations of the United Church of Christ are calling for justice — by attending public demonstrations, writing letters, making phone calls, organizing an online vigil and posting a message on an electronic sign board on a busy street. 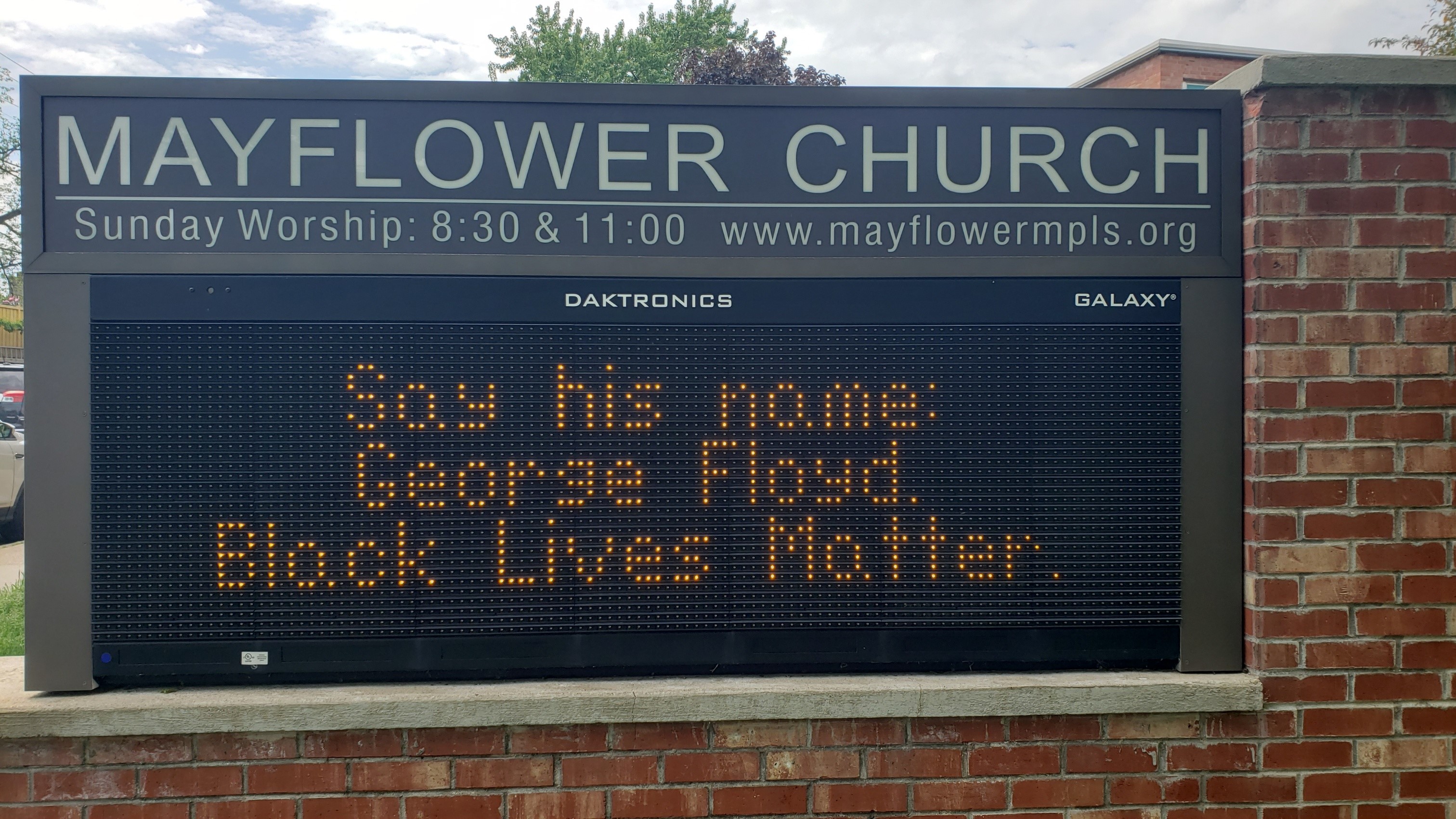 On the evening of May 25, a bystander’s video captured a white police officer kneeling on the neck of the handcuffed Floyd, an African American, while Floyd pleaded that he couldn’t breathe. It then showed Floyd being loaded, limp, into an ambulance. He died at a hospital a short time later. The video went viral on social media. By Tuesday it had made worldwide news and the city had fired the officer and three others who were at the scene.

The Minneapolis police chief called in the FBI to investigate.

‘Being Black should not be a death sentence’

Mayflower UCC, about 2½ miles from the scene, was one of the churches that responded Tuesday. Using its electronic signboard 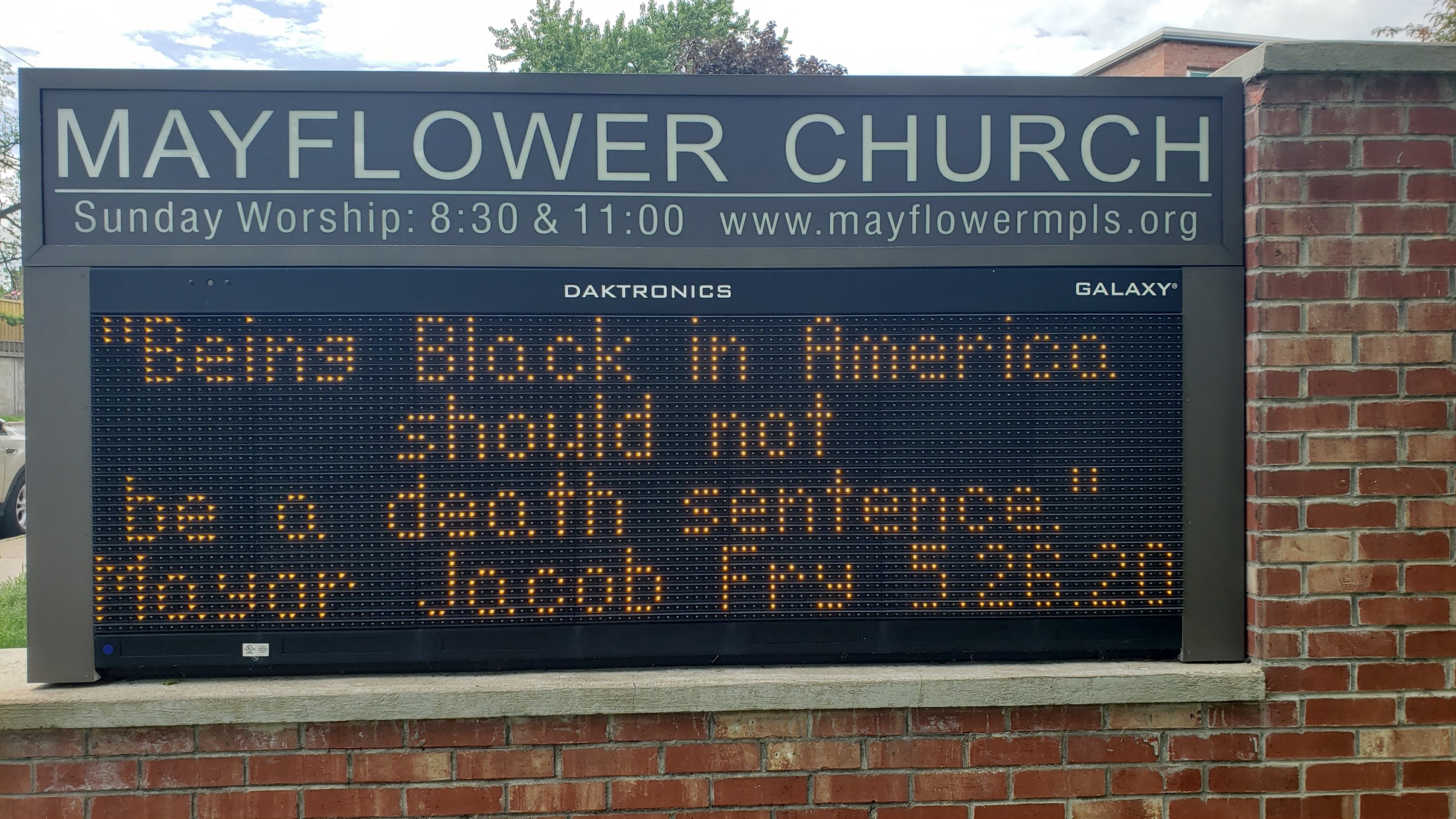 on East Diamond Lake Road, near the entrance to Interstate 35, it quoted something Minneapolis Mayor Jacob Frey had said at an emotional news conference: “Being Black in America should not be a death sentence.” The sign also says: “Say his name: George Floyd. Black Lives Matter.”

Mayflower’s associate minister, the Rev. Christian Briones, was among thousands of citizens of many races who gathered Tuesday at the Chicago Avenue site of the violence. Demonstrators carried signs with messages such as “Jail killer cops,” “Stop acting out of fear” and “Minneapolis Police kills another Black man – ‘I can’t breathe!'” And they carried a spectrum of emotions.

“Some people are hurting,” said Briones (pictured at left). “Others are kind of at a loss for what to do. Others are trying to do stuff, like organize and put together how we can address white supremacy in our city and beyond.” He said Mayflower’s Race Matters Team is conferring about a concrete step to take in conjunction with other activists – “who is the person in power that we need to call.” 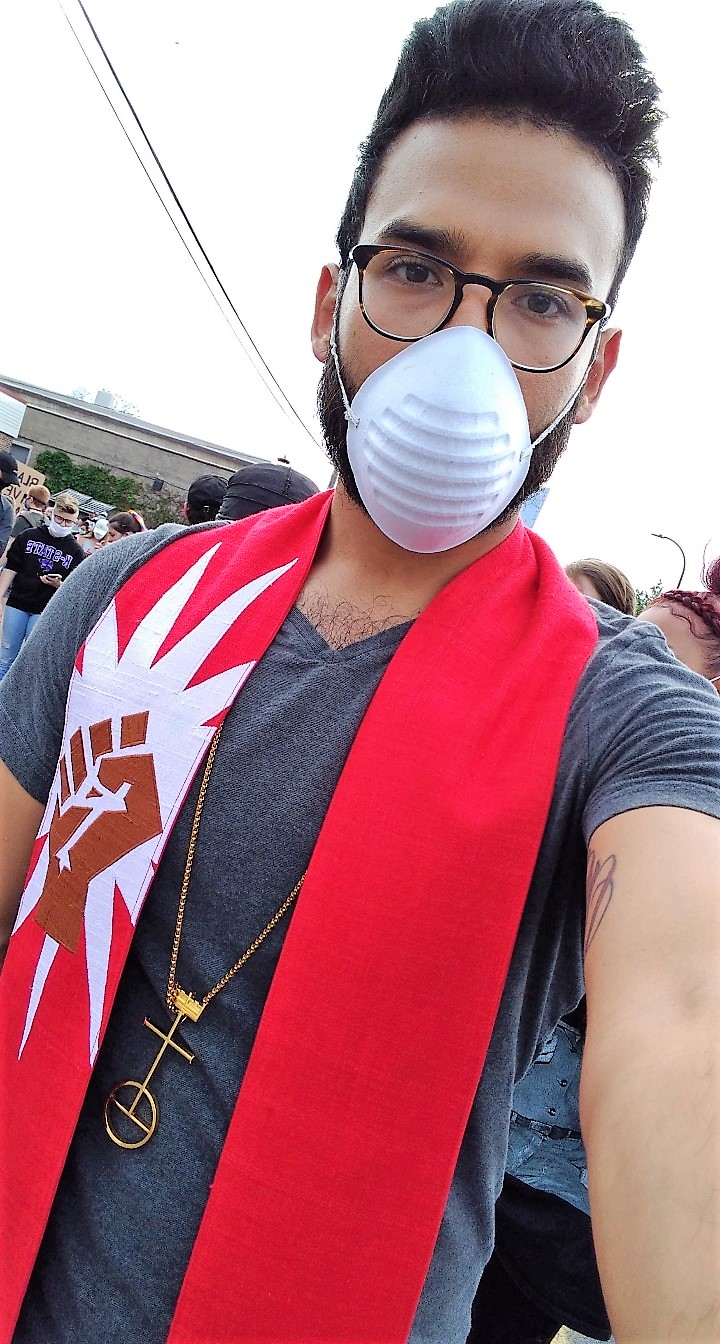 “This Sunday’s sermon will be a lot about George Floyd,” said the Rev. Sarah Campbell, Mayflower’s team lead minister. “After our livestream on Sunday morning, we will take flowers that are at the altar space and put them at Chicago and 38th, the spot where George Floyd was murdered — every Sunday through July and perhaps longer.” In the congregation’s daily email Tuesday, she encouraged prayer for Floyd’s family and friends, for the police and “for God’s mercy as we continue to heal ourselves from our nation’s original sin — racism.”

Online vigil set for Thursday, May 27

“So many emotions this day,” said the Rev. Rebecca Voelkel (pictured below, right), who directs the Center for Sustainable Justice at Lyndale UCC. She, too, was at the Chicago Avenue demonstration, 2½ miles from the church, where, she said, many masked demonstrators did their best to honor the social distancing advised during the COVID-19 pandemic. “Heartbreak and rage in the sinful, callous, senseless white supremacist violence of the police,” she posted on Facebook. “G-d in your mercy, rage and justice, hear our prayer. And then there was the feeling of actually being with other people. I could have wept with the relief and joy of seeing so many beloveds. We all clasped our hearts instead of hugging. We are made for love and justice. Let us continue to resist any system of violence that seeks to kill and maim and destroy our souls.”

The Rev. Rachael Keefe, pastor of Living Table UCC, a similar distance from the scene, said she was encouraging members “to make phone calls, write emails, send letters.” “The goal is to hold the mayor and governor accountable,” Keefe said. “They have both said that the murder of George Floyd was horrible. The question remains as to what they will do.” 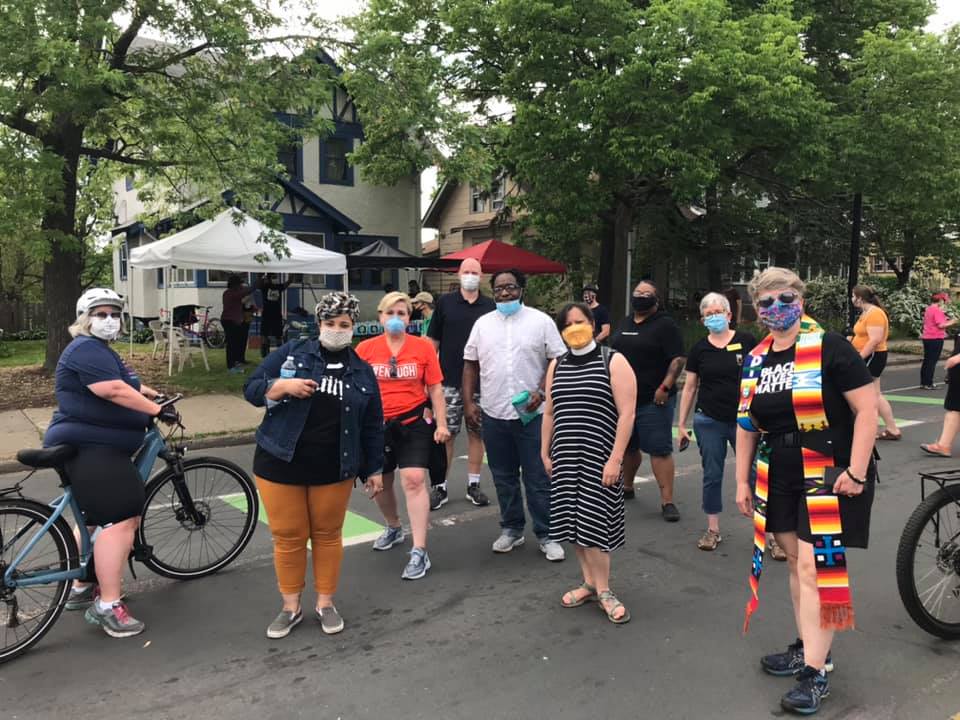 Keefe and the Rev. Oby Ballinger, pastor of Edina Morningside Community Church, UCC, 4½ miles from the site, are working with the UCC’s Minnesota Conference, the Muslim-American Society of Minnesota and others to create an online “interfaith vigil and call to action” at 5 p.m. Thursday, May 28. “We will lament the death of another unarmed black man, confront the idolatry of white supremacy that underlies it, offer responses from our faith, and commit to ongoing action for safe, multiracial public life in Minnesota,” Ballinger said. People who want to participate will be able to find details in a Conference-wide email Wednesday, May 27, and at the Conference’s Facebook page.

The Rev. Shari Prestemon, Conference minister of the Minnesota Conference, also released a statement Wednesday via the Conference’s weekly email and at its website. It included this: “We must confess that the evil scourge of white supremacy, historically aided and abetted by the Christian Church and its self-avowed faithful, has pressed its full weight into the necks of black bodies for centuries and is still actively doing so.”

Struggling for justice in streets ‘and at dinner table’

In a Facebook post Tuesday, the Rev. Lawrence Tanner Richardson, pastor of Linden Hills UCC, just under 4 miles from the scene, expressed his reasons for not attending Tuesday’s protests: “I’m tired of using all the creative brilliance and energy I have to ‘prove’ to people conditioned to not see my humanity, that I matter. So I won’t be protesting.

“Another person who looks like me killed on the streets that I ride through to get to work or meetings or gatherings. #Everyday. The same energy that it takes to leave the house each day, knowing I might not return because of people’s fear, ignorance and hatred, is the same energy I could be using to build and create and enjoy life. But instead, I reserve this particular energy for survival. So when I know I’ll be triggered, or drained of the energy I already have reserved for my survival, I don’t. …

“How does one look for and find a home, or peace, or trust in a place surrounded by people who could literally kill you just because of your skin color? I won’t go. I won’t protest. I won’t be triggered. I won’t be the token on the ticket. I won’t feel safe on any streets or in any room in a land flanked by racism and classism. I won’t.

“But I will say his name: George Floyd.”

Briones, too, noted that public demonstrations can only achieve so much. “It’s the role of Christians, it’s the role of the church, to be on the side of justice, to be people who stand with and alongside of people who have been historically not just marginalized but terrorized,” he said. “I think posting on social media is one way to do it, but in some ways that’s the easy thing to do. Getting out in a more public way, showing yourself, is a really helpful way to show solidarity. One thing I tell people is that the struggle for justice happens in the streets, and at the dinner table. I think that public witness is important, but where are our family and friends who have presuppositions that perpetuate a system of racism and violence?”